Conflict -- is a literary element that involves a struggle between two opposing forces usually a protagonist and an antagonist. What is the conflict in the LFBJ?
Theme -- is defined as a main idea of a literary work that may be stated directly or indirectly. What is the theme of the LFBJ?
Tone -- is an attitude of a writer toward a subject or an audience. Tone is usually stated through the choice of words or the viewpoint of a writer on a particular subject. What is the tone of the Letter?
Alliteration -- a stylistic device in which a number of words, having the same first consonant sound, occur close together in a series. Example from LFBJ: “Tip-toe stance” "the stinging darts of segregation" "curse, kick,...and even kill your black brothers" "tongue twisted and your speech stammering"
Allusion -- is a brief and indirect reference to a person, place, thing or idea of historical, cultural, literary or political significance. It does not describe in detail the person or thing to which it refers. Example: He acts like he is a Romeo. Example in LFBJ: The biblical allusion in paragraph three.
Point of View -- is the angle of considering things, which shows us the opinion, or feelings of the individuals involved in a situation. There are three major kinds:
1. First person point of view involves the use of either of the two
pronouns “I” and “we”.
Example: “I felt like I was getting drowned with shame and disgrace.”
2. Second person point of view employs the pronoun “you”.
Example: “Sometimes you cannot clearly discern between anger and
frustration.”
3. Third person point of view uses pronouns like “he”, “she”, “it”, “they” or
a name.
Most of the LFBJ is in first person. Why is it in first person?
What part of the letter is in second person? Why does MLK make this
switch?
Imagery – the use figurative language to represent objects, actions and ideas in such a way that it appeals to our physical senses. Example from LFBJ: (last paragraph on page 2).

Irony – occurs when words are used in a different manner than the intended meaning of the words such as sarcasm (Example: You are bad). It may also be a situation that ends up in quite a different way than what is generally anticipated. Example from LFBJ: “If I sought to answer all of the criticisms that cross my desk, my secretaries would be engaged in little else in the course of the day, and I would have no time for constructive work. But since I feel that you are men of genuine good will and your criticisms are sincerely set forth, I would like to answer your statement in what I hope will be patient and reasonable terms.”  (He is in jail. Do you really he has a desk and secretaries there?)
Simile – Comparing two things using like or as. Example from LFBJ: “Like Paul, I must constantly respond to the Macedonian call for aid.”

Metaphor – Compare two things without using like or as. Example from LFBJ: “The nations of Asia and Africa are moving with jetlike speed toward the goal of political independence, and we still creep at horse-and-buggy pace toward the gaining of a cup of coffee at a lunch counter." "airtight cage of poverty" "ominous clouds of inferiority"

Rhetorical Question -- is asked just for effect or to emphasize some point discussed when no real answer is expected. Example from LFBJ: “Now, what is the difference between the two? How does one determine when a law is just or unjust?”

Setting – is the environment or surrounding in which an event or story takes place. Example from LFBJ: Deep South in the 1960s.
Anaphora -- is the use of repeated words at the beginnings of phrases, clauses, and sentences. King uses the phrase "when you" nine times to introduce clauses in his periodic sentence. Example: "But when you have seen vicious mobs lynch your mothers and fathers at will and drown your sisters and brothers at whim; when you have seen hate-filled policemen curse, kick, brutalize, and even kill your black brothers and sisters with impunity; when you see the vast majority of your twenty million Negro brothers smothering in an airtight cage of poverty in the midst of an affluent society; when you suddenly find your tongue twisted and your speech stammering as you seek to explain to your six-year-old daughter why she cannot go to the public amusement park that has just been advertised on television, and see tears welling up in her little eyes when she is told that Funtown is closed to colored children, and see the depressing clouds of inferiority begin to form in her little mental sky, and see her begin to distort her little personality by unconsciously developing a bitterness toward white people; when you have to concoct an answer for a five-year-old son asking in agonizing pathos, "Daddy, why do white people treat colored  people so mean?"; when you take a cross-country drive...

Periodic Sentence -- It is a long sentence with many clauses that delays the subject and/or the verb to create suspense. King's long periodic sentence ends with "then you will understand why we find it difficult to wait."
Antithesis or juxtaposition of opposites -- is a parallel structure used make a powerful comparison. Example in LFBJ: "harried by day and haunted by night" (line 24) describes life black person in the Deep South in the 1960s and "inner fears and outer resentments" (line 26). 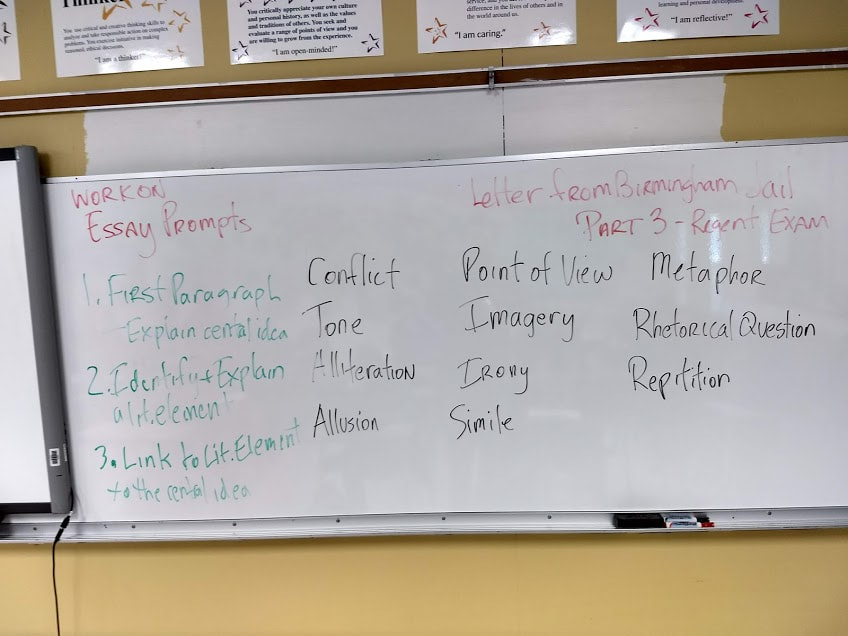